Peter Drucker was  consulting for a CEO of a major bank in US.  For every meeting the  CEO used to assign Peter a time slot of 90 minutes. A highly effective person, the CEO was delivering  consistent results for his bank year-on-year. During the  one-and-half hour meeting the CEO refrained from taking any telephone calls and asked his secretary to handle the same which enabled   him to pay undivided attention to Peter Drucker.

When asked for the reason behind his strategy, the CEO replied, “ Mr. Drucker,  nothing significant happens if I do not devote a minimum of 90 minutes for an important task. However beyond 90 minutes, the grasping power of the mind reduces. Only two people are allowed to call me when I am in a meeting; the first is the President of USA and the second is my wife. The former  will not call me and the latter dare not call me. I return all my calls once  the meeting is over.”

Discipline is the most important aspect for executives to attain optimum productivity.  Some productivity-killing habits you should avoid are:

a  Impulsive Web Browsing, b. Putting off important Work Until Later in the Day & C. Checking mails throughout  the day.  Let us look at them in detail.

Suresh, a sales executive was making an important offer for his client. While doing google search he gets digressed into social media and loses his track. There are two types of tasks a. What is right for me & b. What is right in-front of me. Quite often the latter takes over the former. Please refer the figure. When you are on facebook, twitter or a joke on what’s app ( Right in-front of me) the activity  is going to take away your important time in making that important offer or handling an angry customer.( Right for Me)  The more there is overlap in these two areas ( the common green  portion called as focus area) the better for you in working effectively. 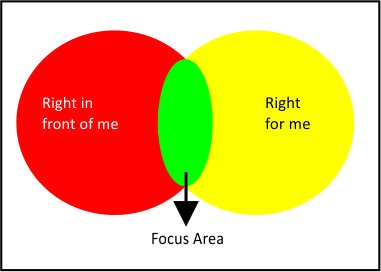 3. Checking Email Throughout The Day: Constant Internet access can also lead people to check email throughout the day. Sadly, each time you do this, you lose up to 25 minutes of work time. What’s more, the constant checking of email makes you dumber. Instead, strategy consultant Ron Friedman suggests quitting Outlook, closing email tabs and turning off your phone for 30-minute chunks of deep-diving work.

In his book, The FOUR-HOUR WORK WEEK, Timothy Ferriss suggests to his readers that he looks at the mail only at 11 AM and then clears them all in a batch. We shall talk a great deal about that in my next update.